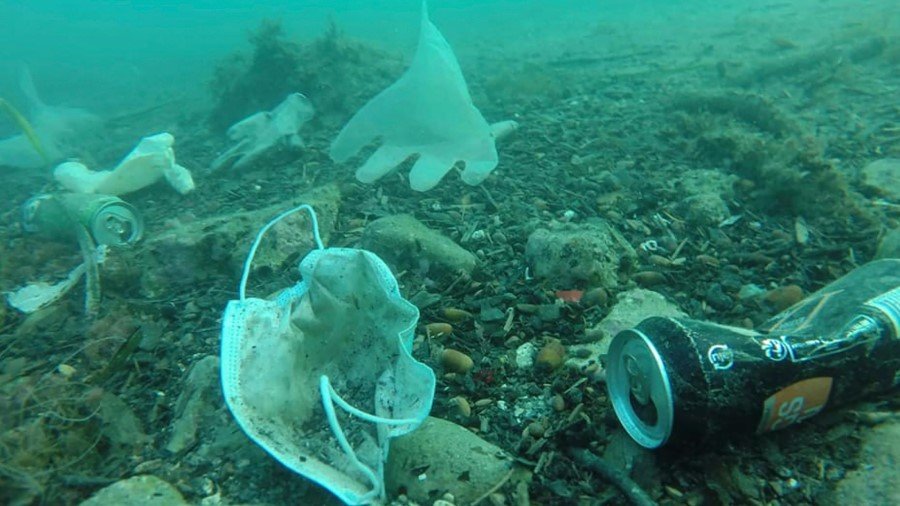 This year when Covid19 hit, it appeared that we were on track to prove that we could produce less pollution. Fewer people were driving to work, and instead working from home. Thousands of industries were shut down, resulting in a marked and measurable difference in the air quality.

Many people, excluding those who contracted the virus, reported less breathing trouble. In India, where air pollution is among the world’s worst, “people are reporting seeing the Himalayas for the first time from where they live.” Comment from Lauri Myllyvirta, lead analyst at the Helsinki-based Centre for Research on Energy and Clean Air.

But that not the whole story, as millions around the world turned to single-use plastics to combat the coronavirus. As the use of masks to defend against Covid19, hand sanitizer and delivery food sharply increased, so did the Covid19 waste.

It may not be so obvious when you are in your home and the garbage truck still comes every week. But in one study in the Mediterranean, divers found “Covid waste”- dozens of gloves, masks and bottles of hand sanitizer beneath the waves of the Mediterranean, mixed in with the usual litter of disposable cups and aluminum cans.

In another survey of marine debris, in Hong Kong’s remote Soko Islands, “On a beach about 100 metres long, we found about 70,” said Gary Stokes of OceansAsia. One week later, another 30 masks had washed up. “And that’s on an uninhabited island in the middle of nowhere.”

This news comes as many countries have encouraged or mandated that their citizens to wear face coverings in public. It has become the preferred method for prevention in the US and much of Europe.

To fight one public health crisis, we are slowly contributing to another.

The impact of the single use, methods of protection from covid19 has been eclipsed by the fight against the virus. Another factor is, when many industries shut down, and the demand for oil was suddenly decreased. And with the excess production, it caused the price of oil fall to never before seen lows.

Oil, being the main ingredient of plastic, naturally the price of virgin plastic also fell. That makes it much more cost effective to make all these hand sanitizer bottles, masks, and gloves from oil and not from recycled sources.

This, combined with China refusing to take our recyclables as of 2018, the issue of the single use personal protection equipment isn’t going away quickly. Some studies have estimated that approximately 8 million tons of plastic trash is introduced into the ocean yearly. This figure is 3% of global annual plastics waste, entering the ocean through multiple outlets, including rivers.

Although 3% doesn’t sound like a lot, in 2015 the world had produced 7.8 billion tons of plastic; more than one ton of plastic for every person alive today. That’s a ton of plastic.

5,800 million tons of primary plastic is no longer in use and only 9 percent has been recycled since 1950.

But it’s also important to understand the value plastic plays in many aspects of life. It is a useful material, often lightweight, resilient, waterproof and cheap. It has an almost constant place in our lives. Even when we try to minimize or cut plastic from our lives, we still are extremely likely to come in contact with it every day.

It has its place where it is useful, but the single use packaging, masks, and PPE need to be treated with much more care. Since these Covid19 waste products are projected to take about 500 years to break down, and their service life is at best, one day. We need to be more conscious of the use and disposal of them.

Our plastic and waste footprint is only getting larger each year. And while measures are being put into effect by many governments to reduce the use, we need to take the initiative to do our part.

The masks are multi-layer and because of this they are hard to recycle. But in France there is a company Plaxtil, that has found a method to do it. Partnering with the local supermarkets, they set up collection points where they are quarantined before shredding them. They are using the formerly waste material to make other things like face shields to fight Covid19 waste.

Looking to the future

It is a matter of looking to the future only a few years and how the earth will look if we continue on our current heading. When a seemingly remote path in the woods or a beach is littered with bottles and Covid19 waste, it feels like we can’t get away from our own mess.

Even if they were to stop producing plastic today, we would still be leaving a huge stain on history. When we see how much plastic in the ocean eventually effects our lives, I hope it won’t be too late. It is the responsibility of each person to take care of their own waste and a little more. It will take many small steps but also some aggressive ones to change our future.

Taking the incentive to make a change even if everyone else isn’t doing it yet and the power is in what you decide to buy. Together we can make the changes for a cleaner tomorrow.