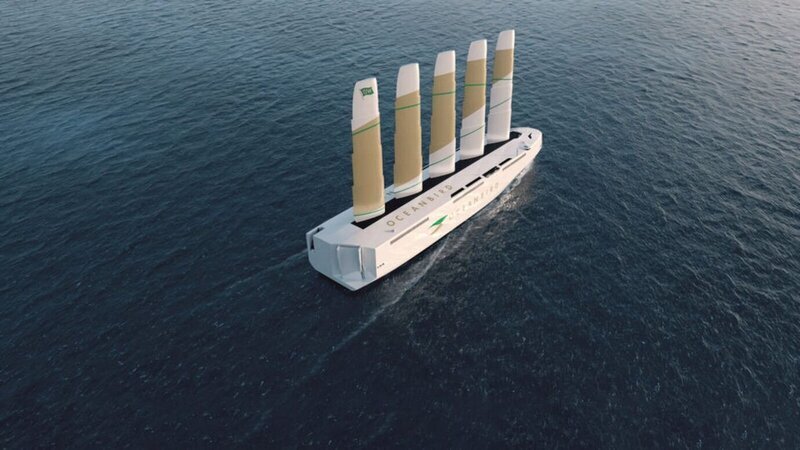 Thousands of years have passed since we first learned to harness the wind. With wind, ocean-going vessels could travel faster and further. Clearly, wind power was key in discovering our planet. But now, it is the concept that is getting a second look to provide more sustainable shipping for the future. And there are a few different companies that are sailing cargo in small ships in 2021.

Of total global air emissions, current shipping accounts for 18 to 30 percent of the nitrogen oxide and 9% of the sulfur oxides. Also, carbon dioxide emissions from shipping were equal to 2.2% of the global human-made emissions in 2012 and expected to rise 50 to 250 percent by 2050 if no action is taken.

Time for a change

Because of this, The International Marine Organization has set a goal of reducing carbon dioxide emissions from international shipping by 40% by 2030. As a consequence, many concepts and ideas have been brought forward with varying success.

Giant kites attached to computer-controlled winches and spinning rotors using the Magnus effect are among the ideas that have been tested to slightly improve the fuel consumption of these giant ships.

In contrast, the latest plan unveiled in Sweden looks to use innovative and advanced technologies to once again harness the wind. By powering the largest ocean-going vessels by the wind in more of a traditional way, Wallenius Marine hopes to reduce emissions by 90 percent to create more sustainable shipping.

Far beyond just a design, the initiative is a Swedish collaborative project led and overseen by Wallenius Marine and including the KTH Royal Institute of Technology in Stockholm, and maritime consulting firm SSPA. Named Oceanbird, this modern sailing vessel will contribute to changing, updating, and remodeling an entire industry.

The plan is for a new class of vessels they are calling a “pure car and truck carrier” or PCTC, with a capacity to carry 7,000 cars. Designed at over 650 feet in length it will have a 32,000-ton displacement. Additionally, made of a mixture of metal and composite, the sails will be almost 350 feet high. That’s twice the height of those on the largest sailing vessels around today.

It will be possible to ‘reef’ the sails, reducing their height to approximately 164 feet. This allows the ship to reduce power in heavy wind conditions and be able to fit under bridges.

The futuristic sails are like airplane wings using the same level of aerodynamic technology.

Although “the general principles of solid wing sails is not new,” designing the Oceanbird’s sails has been a challenge, says Mikael Razola, a naval architect and research project manager for Oceanbird at Wallenius Marine. “It is a mix of aeronautic and shipbuilding technology. We evaluate performance and safety by using a combination of computer simulations and physical experiments.”

While the material is the same, the steel hull of a wind-driven vessel needs to be designed in an entirely different manner to a motor-driven one.

Primarily powered by the wind, a North Atlantic crossing with Oceanbird will therefore take around twelve days, compared to the eight days it takes conventional vessels.

The vessel will also be fitted with small engines to help it maneuver in and out of port. Also, the project is backed by an investment of 27 million Swedish crowns ($3.2 million) from the Swedish Transport Administration, a testament to the potential importance of the project.

“If these kinds of wind-powered ships would become common in the industry, it would be a big step ahead for making the maritime sector fossil-free,” said Rein Jüriado, Chief Strategist at the Swedish Transport Administration.

Sustainable shipping is not just an option because it doesn’t appear that we will reduce shipping in the future, so we need to make it cleaner.

“The development project has come very far,” says Richard Jeppsson, VP Commercial & Partnership at Oceanbird. “We have started testing with 7-meter models in open water recently, and will continue this fall.

Finally, the design will be ready for orders in 2021 and we are aiming for a possible launch in 2024.”

All images and the video courtesy of Wallenius Marine