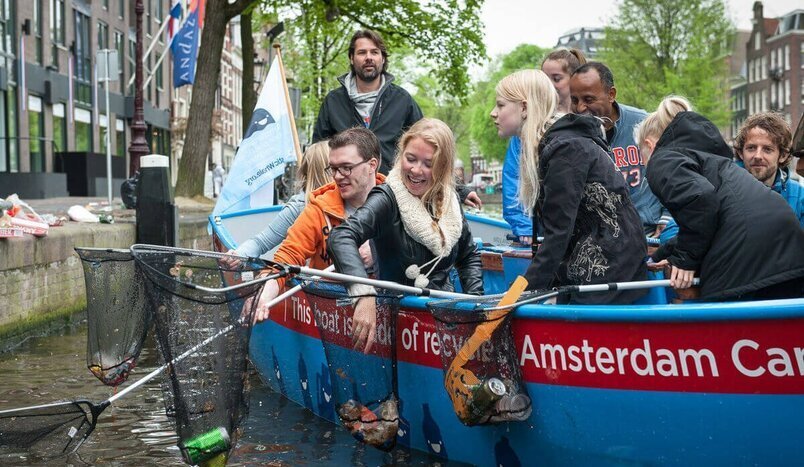 Plastic Whale is the first plastic fishing company in the world. Based in the Netherlands, the community-oriented organization is designed to rid nature of the plastic invasion. After a period of time spent traveling made Marius Smit acutely aware of the global ‘plastic soup’ problem. So he set out to start Plastic Whale by himself without any business model or plan.  Only with a few strong convictions, he wanted to fish for ocean-bound plastic.

“I believed,” says Smit, “there were many people with the desire to contribute to making a change in our beautiful world but they didn’t have a way to do it. People want to see progress and solutions, not just talk about the issues.”

He also saw it necessary to take action against the growing problem of plastic in the water. It’s a serious issue and would become a lot more concerning in the future.

How to set the idea in motion

Marius Smit came up with the idea to replicate what US President John F. Kennedy did in 1961. He put forward something that at that time was considered impossible. Kennedy’s challenge to put a man on the moon lit the fire in the space race against Russia. The challenge created a movement that would unite all those who wanted to make the impossible possible.

Smit decided to start tackling it head-on, starting from his own back garden in Amsterdam. So he thought that if he created his own “man on the moon” it could start a movement of citizens that would gradually include governments and institutions. And this idea would guide them to work together towards a solution of fishing for ocean-bound plastic.

Soon he was contacted by all sorts of people wanting to help.

Interestingly they were all specialists within their own fields. He began speaking with recycling companies, boat designers, accountants, boat builders, lawyers, and PR companies. The willingness to help him for free is how Plastic Whale started.

So in January 2011, Smit began to assemble the first ‘plastic whale.’ The fishing boat is made from recycled plastic. The goal with the electric powered boat was to take it through the canals of Amsterdam scooping up the ocean bound plastic soup using fishing style nets.

Finally, eight months later, the electric boat, powered by Combi Electric Outboards, was ready to set sail on its first plastic clearing voyage. For the first endeavor, they relied on a team of volunteers. So they arranged some other boats, everyone brought friends, food, and drinks to go plastic fishing in the canals of Amsterdam. Named “the old-fashioned plastic fishing” gave it the feeling of being familiar in Amsterdam.

Check out these articles to learn more about electric boats and electric outboards.

Marius Smit hoped, if 50 people turned up on ten boats, it would be a success. But actually, 450 people on 33 boats showed up for the first year. And the second year they had 1,200 people on 72 boats. It became a hit and companies approached them for plastic fishing as corporate events.

NOT JUST PLASTIC FISHING, BUT SIGHTS TOO

The two-hour excursions, during which everyone actively picks ocean-bound plastic from the water with a net, they go into some of the most beautiful spots of the city. Seeing the city center from the water, away from the overcrowded areas, and doing your part to clean up plastic waste is a great way to spend part of a day.

Plastic Whale collects the plastic from the Amsterdam Canals and the Rotterdam Harbor.  With the help of thousands of people and hundreds of companies each year they are able to do more and more. A lot of plastic is removed from the canals, but they keep the PET bottles separate to use those bottles as material to make more boats. The fleet has grown to thirteen boats.

It takes 8,000 bottles to make one boat,” Marius Smit says. “Some boats have bottle caps as mosaics on the deck. And wherever you look, you are made aware of litter, plastic, and recycling.” Collecting the ocean-bound plastic is much easier in the calm waters of the canals than out in the open ocean.

“We can’t fish enough. Over-­fishing is what we’re about,” says Captain Jack ­Zuidema, one of Plastic Whale’s eco-sailors. In our case, it’s a positive phenomenon. Our aim is to go out of business. We exist to solve a problem, to clear the litter from the city’s ­famous canals. And if we needed further incentive, the day before one of our eco-friendly excursions, a dead pregnant sperm whale was washed up on the coast of Sardinia with 22 kilograms of plastic in its stomach.”

Plastic Whale fishes for plastic that is used to create the boats and now furniture too. Next to collecting and creating, Smit values teaching while doing all this. He shows that plastic and other garbage don’t belong in nature. Also that ocean bound plastic is valuable because it can be used as raw material for other products.

“A year ago”, Smit recounts, “we were having lunch at our table and realized that the table was too small for all of us given the huge growth of our team. At that moment, someone from the team pointed out that we could have built a table from the same plastic we use for our boats.

”I loved the idea and I started thinking about all the companies that wanted to do something for the issue of plastic and to promote a circular economy.”

His new idea was, why don’t we make high-end office furniture made of ocean-bound plastic from Amsterdam’s canals? Plastic Whale Circular Furniture is now created following the full ­principles of circular production and design.

Nothing goes to waste. And at the end of its life cycle, they even pay to take the product back because it is used as a raw material in new products. Design inspiration is the oceans’ most impressive citizen, the whale.

“We make whale-fin chairs and barnacle lamps made from pressed PET as well as acoustic paneling with pleat design motifs like a whale’s throat. Our boardroom tables are inspired by a surfacing whale. Complete with a blowhole,” captain Jack concludes.

EVERYONE CAN GET INVOLVED IN SOME WAY

To go on a Plastic Whale fishing trip, tourists pay $30 per person. Smit’s enterprise has four main sources of income: company sponsorships, company plastic fishing events, exploitation of the boats (tourists and private boat rentals), and giving a lot of presentations about the way we created a fast-growing social enterprise from scratch. And they are proud to not dependent on any subsidies.