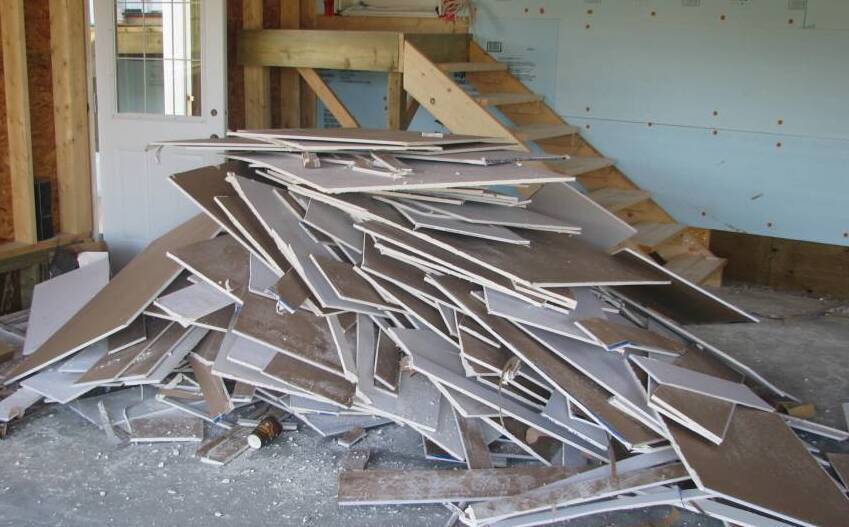 Can you Recycle Drywall? Who is Recycling Gypsum?

Gypsum is the soft sulfate mineral that is used to make drywall. It is mined from many places around the world and is used as a fertilizer, in blackboard chalk, and in many types of plaster.

The reason for the use of gypsum is first, the fire resistance. Homes and structures built of wood need fire protection and 5/8” drywall is tested to provide an hour of fire resistance. Secondly, it adds strength to the walls and ties the structures together. And thirdly, it is a relatively easy material to work with and easily repairable.

How is drywall made from gypsum.

Gypsum is mined from all over the world and interestingly today, many of the gypsum plants are located near coal-burning power plants, but more on that soon. The process to make the soft mineral gypsum into the plaster powder is first, the mineral is ground and sent into an oven at 350 F in a process called calcining, which removes 75 percent of the molecularly bonded water. It is then sent through a second grinder to make very smooth and consistent plaster powder.

When the plaster powder is at the job site or the drywall plant, it is mixed with water and the molecules of water are reattached causing the gypsum to grow into the interlocking formation of gypsum crystals again. So, if the drywall board is heated in a fire, it again puts off the moisture, helping with its fire resistance.

How is drywall recycled?

Many drywall recyclers will provide a dumpster just for drywall, while others set up locations where you can drop your offcuts or your drywall from remodels. They use grinders to break it up into small bits, and magnets to pull out screws, nails, and metal corner beads. It then goes to be filtered where the paper from the faces is screened out to be sent to paper recyclers. It will be used to make recycled paper, and possibly as the paper faces of drywall once again.

Most companies that are recycling gypsum say they can consistently put out 99% pure gypsum. This powdery product can then baked once again, mixed with water, and poured in between two sheets of recycled paper, and be sent out to be installed in another home.

Another option is to use it for fertilizer, as it is a moderately soluble source of essential nutrients, calcium, and sulfur, and can improve plant growth. The history of using gypsum for fertilizer goes back to the 1700s in the US. Gypsum is very effective at breaking up clay to make soil that breathes and can grow plants again. So what do they use to contain the liquid in landfills? Compacted clay.

Here is where it gets interesting, many of the gypsum plants are near coal-burning power plants, and that is because of the process of the scrubbers in the chimneys remove sulfur dioxide from the exhaust of the burned coal. This sulfur is what caused acid rain in the 1970s and 80s in America and Europe. The process of removing sulfur dioxide uses limestone and produces what is called synthetic gypsum and it has the same properties as mined gypsum, and many times, more consistently pure.

Many of the coal plants have a conveyor belt running through the fence to the neighboring drywall plant. But now with the decline of the number of coal plants around the world, except for China, most countries will need to see an increase in mining the mineral. I have noticed on the buckets of drywall mud that I buy, it clearly says CE, China Export.

The U.S. coal-fired power plant fleet has lost one-sixth of its capacity since a recent peak in 2011. The U.S. Energy Information Administration expects a quarter of the nation’s current coal-fired power generating capacity to close in the next dozen years.

And since 2010, 45% of all drywall in the US is made from synthetic gypsum derived from the exhaust gases of domestic coal-fired power plants, and there isn’t a solid plan to replace the enormous quantities of gypsum that will be lost when the country’s coal plants are closed. The coal plants produced enough for the drywall companies and some even sold some to the agriculture industry, because they had extra. Gypsum, when spread as a fertilizer, is great for breaking up clay into useable soil.

Full circle on the coal to gypsum to being put in the landfill is that sulfate-reducing bacteria in the moist, airless, carbon-containing environment in a landfill convert sulfates to toxic hydrogen sulfide gas. Gypsum in the landfill will decompose and release up to a quarter of its weight in hydrogen sulfide the characteristic foul odor of rotten eggs. It is poisonous, corrosive, and flammable and is the cause of acid rain.

The problem is that the synthetic gypsum is a waste product for the coal plants, making the price per ton lower than mined gypsum, so when coal power is eliminated, the additional cost to transport mined gypsum will raise the price of the final product. Recycling gypsum obviously won’t completely take up the difference, but it can help.

This is a detailed video about how the scrubbers work.

So recycling gypsum waste also reduces the need for the quarrying and production of virgin gypsum raw materials. It also keeps the atmosphere and land cleaner and for that reason, there has been increasing regulation on the disposal of drywall.

If you can send the used drywall to be recycled, it seems like a no-brainer, but first, it needs to be convenient, and for now, that will be the problem for most.

Where we are with recycling drywall today

New West Gypsum Recycling began recycling wallboard waste in Canada in 1985. The recycled material is a blend of pre-and post-consumer, wet and dry gypsum waste that is a source of raw material for use in the manufacture of new drywall products.

Zanker Recycling began recycling gypsum in the form of sheetrock in 1999. In the recycling process, materials such as wood, metals, and trash are removed on-site where a dozer is used to crush the materials.

Gypsum recycling in Europe was started by the Danish company Gypsum Recycling International A/S in Denmark, in 2001. After a few years, the recycling system received waste from approximately 85 percent of all public civic amenity/recycling centers, and a recycling rate of 60 percent of all gypsum waste was achieved. The system has been exported to cover other European countries.

Gypsum Recycling International A/S collects the waste and crushes it. National Gypsum then recycles the material as new wallboard at its Portsmouth, N.H., plant. In addition, the plant uses recycled paper for its facing and backing and recycles 100% of its own production waste.

Gypsum Agri-cycle is one of the first companies to recycle drywall in the USA. They recycle new construction drywall only as Pennsylvania does not allow them to recycle demolition drywall.

Urban Gypsum is a division of Laneco, Inc. and provides gypsum wallboard recycling services for the Pacific Northwest of the United States. This recovered gypsum is then distributed to agricultural and industrial customers in the region keeping the wallboard from ending up in the landfill.

So how do you find a company that recycles drywall near you?

Here are some pages that you can search by your location and the material you want to recycle. Remember that even though it is not widespread yet, as the coal plants continue to shut down and as the landfills are receiving increasing amounts of trash, the regulations on what can be landfilled will get tighter. This will no doubt raise the pressure and interest in recycling drywall.

And here are some drywall haulers that recycle.

Stay curious, and if you enjoyed reading this you probably know someone who would be interested in this too. You know what to do, and thanks for your time.

To learn to recycle other common materials check out my list of things that are recyclable.

3 thoughts on “Can you Recycle Drywall? Who is Recycling Gypsum?”